Heidegger, Neurosciences and the Exemption from the Descartes' Error

Extended Synopsis: In my presentation I display the convergence of Heideggerian theory and Cognitive Neurosciences and at the same time I attempt to formulate an hypothesis for the naturalistic foundation of meaning as a property of the human cognition. To begin with, this presentation deals with the question of intentionality. In general, the term “intentionality” refers to the property of minds to be directed_towards “something”, things, objects, events, situations, relations and ideas of the world, which are mostly external, “outside” the thinking mind itself. One part of the problem is to answer how (and if), a biological- physical event inside one’s head, i.e. neurons or brain as a total, directs towards something that is “outside”, in the world and how during this process, a certain mental content, a certain meaning, arises. The second part of the problem relates to the nature of intentionality. Is intentionality in fact a physical process? For the naturalistic foundation of intentionality, some philosophers suggest that this direction_towards, does really exist both in natural and artificial phenomena. But what does it makes the intentionality of the human mind really unique? A convincing argument on that, proposed by John Haugeland, is the natural- inherent- tendency, to continuously test the mental content, the meaning, and confirm or modify the way in which the world of the subject that thinks is interpreted. Unlike others, Heidegger assumed that intentionality is not a metaphysical notion but a feature of the way we are experiencing the world. Dasein (the human subject that thinks and is in the world) when directed_towards something, doesn’t come out of the inner “sphere” of itself where it is supposed to be enclosed. Dasein is already there in the world, and when it thinks or realizes something, it doesn’t “return” into a “chamber” of consciousness, but remains, as an In_the_World_Being, in the same structural level with the rest of the world.

Based on this position, neuroscientists, like Walter Freeman III, conceived an explanatory model which shows that the human body (brain – nervous system – sensors) is in constant interaction with the environment. This interaction continuously modifies the content of the intentional statements updating the way the subject interprets its world. So we can say that intentionality is a “wayness”, in other words intentionality is the way that humans (via their brain, central nervous system and sensors), are in the world and interact with it. In this sense, intentionality can be naturalistically established.

The second question that arises at this point is why, if intentionality is a physical process based in the continually interaction of the word and the brain, do we need representations in our head? Dreyfus claims that, we don’t need to represent the model of the world “internally”, because the model of the world is the world itself. As Heidegger points out: “When I perceive the chair and say, ‘The chair has four legs,’ the sense of this knowledge according to Rickert is the acknowledging of a value. [However], even with the best of intentions one cannot find anything like this in the structure of this perceptual assertion. For I am not directed_towards representations and less still towards value but instead toward the chair which is in fact given… When I look, I am not intent upon seeing a representation of something, but the chair…”

Besides the problems of dualism (body - mind and self - world) that are conserved thanks to the notion of representations, which keeps the Cartesian fallacy alive (as Heidegger remarks) there is a core problem that remains unsolvable for cognitive scientists and neuroscientists and can be described as follows: Given a dynamically changing world, how is it possible for a non-magical system to retrieve and (if necessary) to revise, out of all the representations that it possesses, just those representations that are relevant in some particular context of action?

This problem, better known as the frame problem -as well as the representations problem in total- can be solved through a Heideggerian manner. Freeman, again, organized a series of experiments with the olfactory- bulb of rabbits. The results show, as Freeman concludes, that every neuron in the olfactory bulb participates in generating each olfactory perception. In other words, the salient information about the stimulus is carried in some distinctive pattern of bulb wide activity, and not in a small subset of feature-detecting neurons that are excited only by, let’s say, fox-like or carrot-like scents. The other interesting finding was that the macroscopic bulbar patterns do not relate to the stimulus directly but instead to the significance of the stimulus.

While the rabbit is sniffing, its olfactory bulb exhibits some particular energy states which are called attractors. Freeman explains that each new attractor does not represent, for example, a carrot, or the smell of carrot, or even what to do with a carrot. Rather, the brain’s current state is the result of the sum of the animal’s past experiences with carrots, and this state is directly coupled or resonates with the affordance offered by the current carrot. What in the physical input is directly picked up and resonated with, becomes, when the rabbit sniffs, the affords-eating.

The idea of “affordances” that introduced by J. J. Gibson can be originally tracked down originally in the Heideggerian thought of “pressing into possibilities”. As Heidegger wondered in Time and Being: “Why does the understanding –whatever may be the essential dimensions of that which can be disclosed in it- always press forward into possibilities?” Expanding the Heideggarian view, Merleau-Ponty assumed that, when we are coping, we are drawn in by affordances and respond directly to them, so that the distinction between us and our equipment - between inner and outer - vanishes.

At this point, based on the Heideggerian notion of Dasein, my hypothesis about mental content is formulated as follows: If we eliminate the difference between the self and the world, the inner and the outer as described above, then, it is possible to redefine the concepts of mental content and meaning, as properties of a system that includes each thinking subject together with its world. In such a way, the question about the neural mechanism of meaning, what Ramachandran calls “the quest for the holy grail of neurosciences”, no longer exists. It is obvious that without some kind of world and stimuli, and possibly without some kind of language, no mental content or meaning, can ever exist. In this sense, if the agent and the world constitute, qua a certain system, necessary conditions for the mental activity, it could be argued that the mental content, i.e. the meaning, is nothing but an emergent property of that system.

According to this assumption, the mental content, the meaning, is not to be found within a metaphysical mind, or in brain representations, nor is it an external (third) entity. In fact, asking “where is the mental content?” or “where the meaning is?”, is like asking where is the liquidity, or the whiteness. Considering the meaning as a property of a certain system (brain – body - world) we can further assume that it is this property of the system as whole that causally affects, by downward causation, the neurons, that strengthens or weakens the patterns of brain activity, etc.

This strengthening or weakening procedure can be better understood, if we look at what happens into various human activities, with the scientific activity as a leading example: what is happening in fact, is a “trial and modification” process, through which the occasionally emerging problems are solved in situ. If a certain hypothesis cannot be proved and the problem is not resolved, then what happens is what Kuhn calls “crisis” and Heidegger calls “anxiety”. These situations are leading to a “paradigm shift” or, through a Heideggerian point of view, a “change” of the meaning of the world.

As Freeman claims, his read out from the rabbit’s brain shows that each learning experience that is significant in a new way sets up a new attractor and rearranges all the other attractor basins in the landscape: “I have observed that brain activity patterns are constantly dissolving, reforming and changing, particularly in relation to one another. When an animal learns to respond to a new odor, there is a shift in all other patterns, even if they are not directly involved with the learning. There are no fixed representations, as there are in computers; there are only significances.”

In conclusion, the Heideggerian notion of “In_the_World_Being”, could provide, in the right context, an idle fire escape for some burning questions of the Neurosciences. Specifically, considering the intentionality as the fundamental way of interaction between body - brain and world, eliminating the representations (at least in the way we conceive of them in representational and computational theory) and setting up a new understanding of the mental content and meaning as properties of the system (body- brain and world), we may solve some conceptual problems and contribute, at the same time, to the revision of some basic premises of Cognitive Sciences. 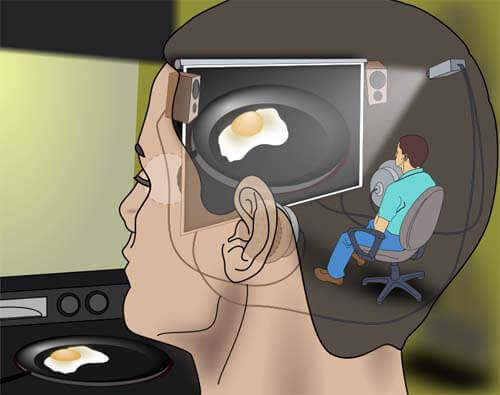